Our Story/Elizabeth and Tom Ventura 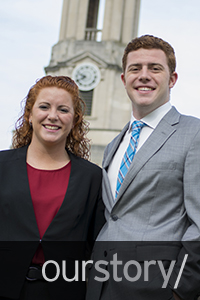 Elizabeth Ventura grew up right outside of State College, in the town of Centre Hall. Her parents, uncle, and older brother are all alumni of Penn State.

Ventura, on the other hand, was rebellious in a way (along with her older sister, who enrolled in a pharmaceutical program elsewhere), by deciding to play soccer at another university, which she did for three seasons.

However, as her third season came to an end, and in the middle of her third year of studies, Ventura realized graduation was quickly approaching, but her future seemed unclear. After careful thought, she decided following in her family’s footsteps was the right path, and transferred to Penn State to study hospitality management, an area that Ventura’s uncle and older brother both studied at Penn State.

When Ventura arrived at University Park, she hit the ground running. She became the special events chair for the student chapter of Penn State Hotel & Restaurant Society before being named president in December 2014. She also completed internships for Starwood Hotels & Resorts in New York City; Scottsdale, Arizona; and San Diego, California.

The experiences paid off; Ventura will join a management training program at Westin Savannah Harbor Golf & Resort Spa following her May 2016 graduation.

Recently, Ventura received the Harvey P. Kamp Student Leadership Award, which is endowed by friends, colleagues, and alumni of the School of Hospitality Management(SHM) in honor of Kamp, who graduated from Penn State in 1970 and was a member of the SHM faculty and director of alumni and industry relations from 2001 to 2007.

Throughout Ventura’s experience at Penn State, her younger brother, Tom Ventura, has been alongside as a fellow hospitality management student.

“Tom and I are best friends,” Elizabeth said. “He is definitely my support system. If I did not have Tom by my side, this would definitely have been a different Penn State experience for me.”

For Tom, studying hospitality management at Penn State seemed like a natural fit. As a student, he has definitely made the most of his time. After completing an internship his freshman year with Starwood Hotels & Resorts in New York City, he earned his real estate license. Ultimately, he would like to pursue a career in hotel brokerage, commercial real estate or real estate development in a metropolitan area.

Although a full-time student, Ventura also finds time to work for one of the top real estate teams in Centre County. In March 2015, he sold his first property—a building lot. Roughly two months later, he sold his first house to a family relocating to State College.

“It was so rewarding to help get them into their new home. The family had been living apart for two months and to see them come back together and get to be a family again was so incredibly amazing.”

Tom is taking advantage of SHM’s expanded real estate curriculum under the direction of John O’Neill, director of the new Center for Hospitality Real Estate Strategy at Penn State.

“I’m just excited to be a part of this new opportunity within the major,” Tom said.

More than 4,500 Penn State students are enrolled in the College of Health and Human Development (HHD) studying a wide-array of fields, each committed to the concept of improving the quality of life for others. Liz and Tom Ventura both found a home in SHM.