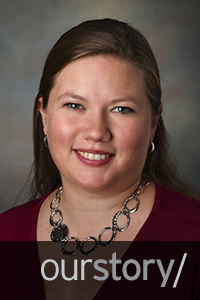 When instructing an introductory course for American Sign Language, on the first day of class, Sommar Chilton uses sign language to introduce herself and the course to students.

Most students look back at her with blank stares or confusion.

“That day we make an agreement to each commit to the class,” Chilton said. “With their efforts in the course, fifteen weeks later I sign the same introduction and this time the room is filled with students who are able to follow along and understand what all their hard work in and out of our class has enabled them to do.”

Chilton, an instructor with the Department of Communication Sciences and Disorders, has taught at Penn State since 2001. During that time she developed and taught the department’s first Penn State World Campus course, served as adviser to the Penn State Sign Language student organization, and received the College of Health and Human Development Alumni Society Excellence in Teaching Award.

For Chilton, one of the most rewarding aspects of her career is making a positive impact on her students.

“When a student says to me that I made a difference in their lives or I helped them to think about something from a different perspective, whether it is people who are deaf or sign language, that is the best thing I could ask for from my students,” Chilton said. “Knowing that they have the opportunity to leave our time together with more than they started with is what keeps me coming back to do it all over again.”

One of those students is Laura Stephan, who graduated from Penn State in 2004 and is now a speech-language pathologist who works with blind and deaf-blind pre-school students. Chilton instructed one of Stephan’s first classes at Penn State.

“It quickly changed my life,” Stephan said. “Sommar opened my eyes to a language and a culture that I would not have had much exposure to, otherwise.”

After enrolling in several courses instructed by Chilton, Stephan became a teacher’s aide for Chilton.

“My professional path was shaped by that very first class and without Sommar's influence, I wouldn't be where I am today,” Stephan said.