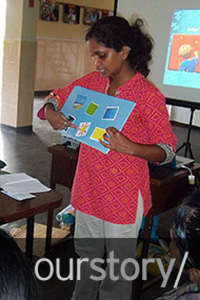 As an undergraduate speech-language pathology student in India, for the first time Nimisha Muttiah had the opportunity to work with children with autism spectrum disorders (ASD) at specialized pre-schools.

After the experience, Muttiah returned to her home country of Sri Lanka where she started working with three children with ASD.

That is when Muttiah noticed something was missing.

“Parents were desperately looking for professionals who would work with their children and for schools that would accept these children,” Muttiah said.

While at Penn State, Muttiah wanted to apply what she was learning in the classroom directly to her community in Sri Lanka.

“I saw for myself the lack of professional and material resources and felt there was a genuine need and void that needed to be filled,” she said. “With my focus areas in mind, I studied at Penn State and spent my summers in Sri Lanka implementing my research.”

More than 4,500 Penn State students are enrolled in the College of Health and Human Development (HHD) studying a wide array of fields, each committed to the concept of improving the quality of life for others. Daccach, who found a home in the Department of Communication Sciences and Disorders (CSD), is one of those HHD students, and this is her story.

While state-of-the-art technology is available in the United States to help children with ASD better communicate, Muttiah knew such resources would not be accessible to parents in Sri Lanka. Therefore, she researched low-technology communication options that could be used in developing countries and other low-resource communities.

Muttiah conducted workshops with teachers and parents, presented public talks on topics such as ASD, and conducted presentations for general physicians to help them recognize ASD. She also provided physicians with educational resources for children.

“I feel that the work I have currently done in Sri Lanka is barely scratching the surface,” Muttiah said. “There is much more that needs to happen in order for children with special needs to receive satisfactory educational and communication services.”

Muttiah plans to one day continue her efforts in Sri Lanka. Currently, Muttiah is a speech language pathologist at Franciscan Hospital for Children in Boston.

In addition to CSD, there are a variety of areas for students to study within HHD through the Departments of Biobehavioral Health, Health Policy and Administration, Human Development and Family Studies, Kinesiology, Nutritional Sciences, Recreation, Park, and Tourism Management, and the School of Hospitality Management. Learn more about HHD.