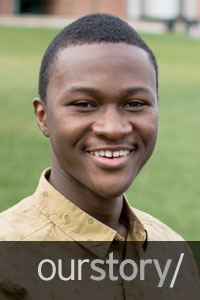 For first-year Penn State student Emmanuel “Manny” Houndo, it was a pivotal moment in his life when Beyoncé shared a YouTube video of him playing her song, “Drunk in Love,” on his violin.

A social media shout-out from Beyoncé, Grammy winner and Super Bowl half-time headliner, is a big deal, particularly for a teenager in high school with a passion for music.

“At that point, I was posting music videos online purely because it was fun. A week after I posted ‘Drunk in Love,’ I got a text from my friend saying Beyoncé shared my video,” Houndo said. “I told my parents, then I looked on Facebook, and everything was going crazy. At that moment I literally watched my views skyrocket.”

Not only did Beyoncé’s fans notice this high school violinist, but the entertainment industry also noticed. Soon, Houndo found himself performing in Los Angeles for the BET Network’s Experience event, which allows young artists to network and perform with top celebrities in attendance, such as Snoop Dogg and Justin Bieber.

Next, a TV producer contacted Houndo, and before he knew it a contract was part of the discussion.

Suddenly, new and unexpected possibilities were on the table. But Houndo’s parents reminded him why their family moved from West Africa to the United States, which was for Manny and his family to get an education.

So that’s what Houndo decided to do; he would attend college after high school, not follow an immediate path to the entertainment world.

The academic motivation led Houndo to Penn State, where he is a dual major studying music (classical violin) and health policy and administration. He is the only freshman first violinist in the Penn State Philharmonic Orchestra.

Houndo was born and raised in Togo. When he was 8, he moved with his family to Philadelphia. In elementary school, a teacher asked Houndo to give the violin a try, adding, “then one day you can teach me how to play.” That was the only incentive Houndo needed.

He trained in classical violin, with teachers and mentors instructing Houndo for free at his home because they saw he had a special talent.

He participated in his high school’s orchestra, an all-city orchestra and a district orchestra. In his free time, he would learn pop songs by ear, record them and then upload them to YouTube.

Houndo said that during elementary and middle school he had a difficult time making friends. Unexpectedly, playing pop music with his violin grabbed the attention of other students.

“When I began playing these pieces that they could relate to, things changed. I was no longer ‘the immigrant;’ now I was ‘the violinist,’” Houndo said.

When Houndo decided to pursue a college degree, it was partly based on mentors’ advice that he hone his classical violin skills, ultimately making him more marketable.

“I definitely do not regret that decision. There are so many opportunities I’ve had just these past few months being at Penn State,” Houndo said.

One of those opportunities was meeting Gene Woods, president and CEO of Carolinas HealthCare System and 2017 chairman of the American Hospital Association. Woods earned three degrees at Penn State.

Woods talked with Houndo about the health care field while on campus this fall to receive the Alumni Fellow Award from the Penn State Alumni Association.

Houndo became interested in a health care career partly because both of his parents are nurses. But it was a high school course focused on international current events that introduced Houndo to the complexities and challenges of providing health care in the United States and around the world.

Houndo hopes to one day make a positive impact on the accessibility and quality of health care, ideally while also using his musical skills.

“People really respond to the pop music violinist; once you make that connection and they hear it and relate to it, they’re sold,” Houndo said. “Right there, in that moment, you have their attention, and if I can say, ‘by the way, think about this,’ then that is such a powerful thing. I definitely want to be able to tap into that on a very large scale.”

He added, “I look at idols like Emma Watson and Angelina Jolie, very well-known figures who advocate for issues around the world, and it’s not only about entertaining, it’s about taking a leadership role on an issue you’re interested in and making a difference.”