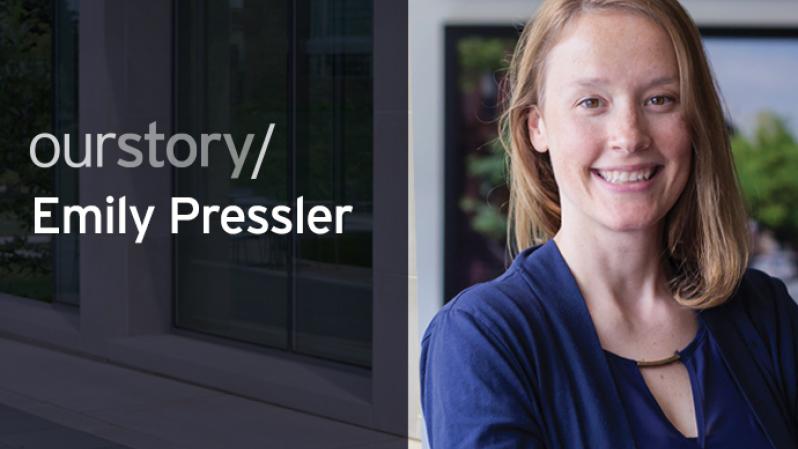 In Central Harlem, New York City, Emily Pressler works to make sure children are supported through college, regardless of their family’s income.

Pressler is a senior research associate at Harlem Children’s Zone (HCZ), a non-profit organization that aims to end generational poverty in Central Harlem. She obtained her undergraduate and graduate degrees from the Department of Human Development and Family Studies (HDFS) at Penn State.

“HCZ is really a community-based organization that understands in order to help end generational poverty, we need to support children and the adults wholly in their lives, which incorporates programming much further beyond the classroom.”

The work of HCZ is important for a number of reasons, Pressler said. For example, while high school graduation rates are on the rise in the U.S., and college enrollment rates continue to increase, large disparities still exist in college graduation rates based on race and ethnicity or socio-economic status.

“As a country we need to support every individual so they can fulfill their potential,” Pressler said. “As the costs of attending college have increased, the risks associated with starting a post-secondary education and not completing it have also grown.”

Pressler said that while not everyone in the country chooses college, she believes in doing what she can to help those who want that opportunity.

“You never know what ideas are sitting inside of that one student who may be able to help solve one of our greatest challenges,” she said.

Becoming a parent has further solidified her professional motivations.

“I have always been interested in supporting the well-being of low-income children and their families, but becoming a parent has really heightened that professional interest,” Pressler said. “As a parent, you can relate with a bigger group of people because you understand that their lives are intertwined with someone else's success and well-being. I am confronted on a more intimate level with the reality that parenting is incredibly challenging.”

Pressler said her degree in HDFS opened her eyes to how children can be supported in and out of the classroom, which is a main goal of her work. Research opportunities she had while a student, as well as advice from her adviser, motivated her to take classes and interact with experts in multiple fields, she said.

“While in a class or working on a project with someone who is trained in a different program, you can begin to learn how someone might view the same problem through an entirely different lens,” she said.

Pressler’s training also allowed her to explore developmental processes at both micro and macro levels, exposing her to a variety of ideas, which she now incorporates into her work.

“My day-to-day work at HCZ really spans the range of the human lifespan, and I continue to learn how the context in which individuals develop influences them,” Pressler said. “I love it.”