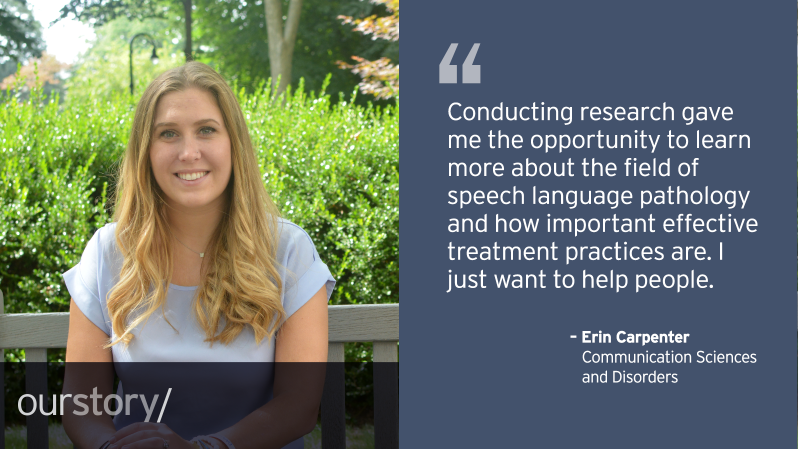 Growing up, Erin Carpenter watched as her mother and grandmother cared for her grandfather who suffered from laryngeal cancer.

“I saw what my mom and grandmother were going through and how hard it was for them, but they always kept it together so well and were so strong,” Carpenter said.

Unfortunately, the disease ultimately took away her grandfather’s ability to speak.

Carpenter spent time with him, often playing games, and along the way she searched for ways to help him communicate through pictures and writing.

As a freshman in high school, her grandfather passed away. Around that time, Carpenter’s mother suggested she look into becoming a speech-language pathologist “because she knew how much I loved being with him and communicating with him.”

Carpenter followed that suggestion and she is now a Penn State student studying communication sciences and disorders.

“I just want to help people like my grandfather,” Carpenter said.

Ultimately, Carpenter wants to conduct research and work in clinical settings with patients with acquired language disorders, such as aphasia, a language disorder commonly diagnosed in stroke patients. She hopes to help improve treatments, particularly among bilingual patients. That’s why she’s also majoring in Spanish.

Bilingual patients became a focus in high school when Carpenter volunteered at a rehabilitation center. At the time she was also studying Spanish. It turned out, the staff needed her Spanish speaking skills to communicate with some of the patients.

“There is a growing population of Spanish speaking people in the United States, therefore a greater need for speech therapists who are trained in bilingual therapies,” Carpenter said.

Preparing her for her career goals, Carpenter spent a summer conducting research at the University of Granada in Spain thanks to a 2017 grant from the National Science Foundation’s Partnerships in International Research and Education to the Penn State Center for Language Science in the College of Liberal Arts.

While in Spain, she worked with researcher Daniella Paolieri to look at native Spanish speakers learning English and the effects of training abstract words – or concepts that cannot be touched like “wisdom” – on the productive vocabulary – or words produced off the top of one’s head.

The study complements research she’s been working on at Penn State with Assistant Professor Chaleece Sandberg, which looks at native English speakers learning Spanish. The hope is to find parallels between vocabulary acquisition among second language learners and patients with aphasia.

“Conducting research gave me the opportunity to learn more about the field of speech language pathology and how important effective treatment practices are,” Carpenter said.