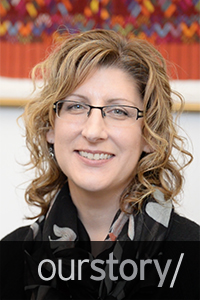 Like many undergraduate students, when Kathy Drager was a sophomore at a small, liberal arts school she was unsure which major to choose.

Despite her father and grandfather both working in academia, Drager did not always envision a career as a university researcher. To help her decide, she returned to her high school and sifted through their career materials. That’s where she discovered speech-language pathology.

“I was always interested in the written word, what words can convey, and the beauty of expression, but I wasn’t sure what I could do with that until I discovered the marriage of language and disability, and what happens with communication when things don’t go well due to a disorder or disability,” Drager said.

Drager selected psychology as her undergraduate major with the intent to go onto graduate school studying speech-language pathology.

Initially, Drager intended to pursue clinical work. However, in graduate school Drager discovered augmentative and alternative communication (AAC), systems that help people who cannot speak communicate in other ways, and wanted to learn more. She also realized she enjoyed conducting research, so Drager put aside her plan to become a practicing clinician and instead pursued her doctoral degree.

The decision would ultimately take Drager around the world and give her a home base at Penn State.

Throughout her office at University Park, there are tiny reminders of her time overseas working in the area of AAC, like a framed photo of mother and baby zebras from South Africa or a mezuzah from Israel.

South Africa, Israel, Norway, Sweden, and Poland are all places where Drager has worked with colleagues to better understand and develop solutions for people with severe expressive communication disorders.

Drager began this line of research as a doctoral student at the University of Minnesota. Ultimately, she joined the faculty in the Department of Communication Sciences and Disorders at Penn State.

“Communication is a way in which human beings can connect with one another, and this is no less important for those who have a disability that makes speech difficult or impossible,” Drager said. “My overall goal is to improve the lives of those with communication disabilities, and to focus on the ability of individuals, rather than accentuating the disability.”

Over the years, Drager has worked with fellow researchers to develop communication interventions through technology, like apps and iPads.

She initially served as associate professor of communication sciences and disorders, eventually becoming the professor-in-charge of the graduate program. In 2013 she became associate dean for research and graduate education in the College of Health and Human Development.

Drager continues to work with colleagues to determine ways to translate those intervention concepts to a low-resource culture, such as Sri Lanka or South Africa, where such technology is not readily available. Throughout, she has advised students.

“I enjoy mentoring students through the research process. There’s always that feeling of pride when you see your mentees accomplish their goals and succeed,” Drager said.

While each career milestone has suited her well – from professor-in-charge to administrator – Drager did not seek out those particular roles or set them as pre-planned career goals.

“I guess I can’t always predict what path I want to take until it’s presented to me,” Drager said. “To my great surprise, I am enjoying this administrative position. I get to solve problems, have fun troubleshooting, contribute to the mission of the college, and exercise creativity while having a bird’s eye view of the university.”