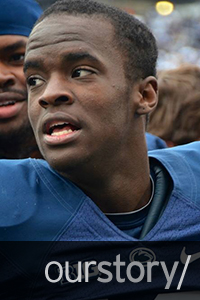 He’s a star on and off the field.

Deshawn Baker, who played wide receiver for the Nittany Lions, graduated in Spring 2015 with a major in kinesiology. An athlete all his life, he knew there were two places he belonged: on the field catching passes from the quarterback, and in the clinic treating patients with sport injuries.

Thanks to the Department of Kinesiology, he was able to do both.

The Philadelphia, Pennsylvania, native chose kinesiology as his primary area of study because he wanted to get into the sports medicine field.

“I have always dreamed of working in health care ever since I broke my leg in ninth grade,” he said. “Since then I have spent many hours trying to achieve this goal by observing some of the best medical officials in their field including, Dr. John Seward of City Line Chiropractic Care. I also have shadowed Dr. Peter Seidenberg, a sport medicine doctor with the Penn State Milton S. Hershey Medical Center.”

More than 4,500 Penn State students are enrolled in the College of Health and Human Development (HHD) studying a wide-array of fields, each committed to the concept of improving the quality of life for others. Baker, who found a home in the Department of Kinesiology (KINES), is one of those HHD students, and this is his story.

The Department of Kinesiology requires students to observe physicians in the field; certain courses require a different number of hours.

For his field experience, Baker shadowed Seidenberg, Penn State football team lead physician, at the Bone and Joint Institute at Penn State Hershey Medical Center. Baker observed Seidenberg in the clinic and operation room, where he was able to view procedures, and learned firsthand what it takes to be a physician, he said.

Seidenberg is also a Penn State Hershey Medical orthopedics physician, specializing in primary care sports medicine. Baker chose to shadow him because he knew him from the Penn State football program.

“Seeing operations opened my eyes to how precise doctors have to be,” Baker said. “And I learned that not all physicians have to perform surgery.”

“The whole experience guided me to the career path I want to pursue,” he said. “Seidenberg also gave me connections to different physicians in the area.”

Now, Baker plans to pursue a career as a primary care physician focused in sports medicine. He is currently enrolled in the Master of Health Administration program at Penn State.

“I want to be a sports physician because I’ve been an athlete all of my life,” he said. “I want to stay around sports; connecting two things I love: sports and health care.”

In high school, Baker lettered in football, basketball and track and field at the William Penn Charter School. Playing wide receiver and cornerback for coach Jeff Humble, Baker scored six touchdowns as a senior, with three scores during his junior campaign. He was an all-conference performer in track and field. Baker was an honor roll student and earned the bronze medal placement on the National Spanish Exam.

In addition to Kinesiology, there are a variety of areas for students to study within HHD through the Departments of Biobehavioral Health, Communication Sciences and Disorders, Health Policy and Administration, Human Development and Family Studies, Nutritional Sciences, Recreation, Park, and Tourism Management, and the School of Hospitality Management.