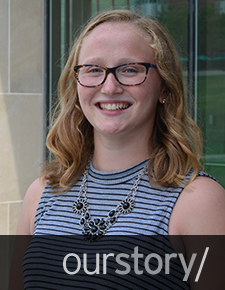 When an infant is a new addition to a family, adequate sleep for everyone in the household is a common issue of concern.

Student Heidi Fanton is helping Penn State researchers, including Doug Teti, head of the Department of Human Development and Family Studies, investigate sleep habits that will ultimately lead to recommendations for healthier sleep habits for infants and families.

Specifically, Fanton examined families in the SIESTA sample when infants were one, three and six-months old.

Fanton added, “The findings also contradict a lot of previous research. Many researchers say that co-sleeping is beneficial for infants and parents. My research, which used objective video data to identify infant sleep arrangements, says it’s not that simple. Persistent co-sleeping may not have any ill effects on infants, but on parents, and especially mothers, it was associated with poorer coparenting relationships, more depressive symptoms, and poorer sleep. It’s important to say, however, that my findings may be most applicable to cultures like the U.S., which does not support persistent cosleeping between parents and infants. It may not be as applicable in cultures where persistent cosleeping is supported”

Fanton appreciates her opportunity to conduct research as an undergraduate student at Penn State.

“It was a completely eye opening experience for me to be conducting research with a professor who has published and worked on as many projects as Dr. Teti has. Through the experience I learned that conducting research is really something that interests me,” Fanton said. “I learned a lot about how much sleep habits can effect a mother in so many different ways and I really want to continue working on my project and developing it further, and hopefully get a paper on this topic published.”

Beyond the research lab, Fanton has served on committees for the Penn State Dance Marathon, is a member of the National Student Speech Language Hearing Association, and is treasurer of the Penn State Twirling Club.

Majoring in communication sciences and disorders, Fanton plans to become a speech-language pathologist who works with elementary school students.