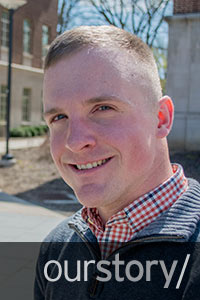 When Andrew Artz graduated from high school in 2006 he was getting by, but he decided that was not enough.

First, Artz began to focus on his health by taking his nutrition seriously and improving his physical shape. Next, he enlisted in the U.S. Army where he served as a combat engineer and completed two one-year tours in Iraq.

After serving in the military full-time for four years, Artz enrolled at Penn State and the Pennsylvania National Guard. With a growing interest in nutrition, he intended to study dietetics. However, that is where things took another twist for Artz.

After becoming intimately involved in the planning of a bicycle stage race he decided studying recreation, park and tourism management was more up his alley.

“I went from a book-focused major to something that was all about your planning, leadership and organization skills, and I loved it,” Artz said. “I wish I would have found this major sooner.”

More than 4,500 Penn State students are enrolled in the College of Health and Human Development (HHD) studying a wide array of fields, each committed to the concept of improving the quality of life for others. Artz, who found a home in the Department of Recreation, Park, and Tourism Management (RPTM), is one of those HHD students, and this is his story.

After joining the Penn State Cycling Club, Artz found himself organizing a collegiate bicycle race that took place in April 2014. The following year he served as a mentor to three other cyclists and began the planning of a larger race open to the public. That race has become The Nittany Stage Race and is being held to benefit the Bestwick Foundation, a non-profit group that provides financial support to families, individuals and local organizations in the Centre County region who are facing health-related or financial hardships. A crowdfunding campaign for the race was launched July 1, 2015.

As Artz planned the two-day event to be held in downtown State College, Pennsylvania, he uncovered a passion for athletic event management. Through RPTM he is gaining the necessary knowledge and skills to pursue such a career.

In addition to serving as secretary and race director for the Penn State Cycling Club, Artz is also a student representative to Centre Region Bicycle Advisory Committee and member of Omega Delta Sigma, a fraternity for veterans.

“I really try not to take for granted the opportunities I have here because I feel like Penn State and the Post 9/11 GI bill has done a lot for me,” Artz said. “To not be involved on campus and do things to better myself is just really selfish.”